While I’ve been wet shaving using a double edge razor for three years or so, I am new to writing reviews of shaving products. I consider myself an intermediate wet shaver.  My razor arrived from Rockwell in mid-March, pretty much on-time from the updated shipping date that was on Rockwell’s blog. It arrived via USPS in a small priority mail box. The razor is nicely packaged in a brushed steel, foam padded box. It’s a nice package, that is protective as well. I was uncertain how they would be packaged, and with the extra two heads to keep track of I was concerned about where or how I’d store them….. No problem, each slides into it’s own snug recess in the box. The package also came with a 5-pack of Astra blades. Not my most favorite, but they would do. 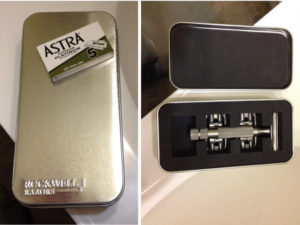 The first thing I noticed on removing the razor from the packaging was that the handle was very nicely knurled. Nice big, grippy knurling, not like the fine, but slippery, knurling on my Gillette Tech. The knurling on the Tech is too fine to provide a good grip when my hands are wet and slippery with soap. Grip is not a problem with the Rockwell.

The second thing I noticed was the weight and size. It’s weight is right up there with my Futur. It’s a hefty razor. It feels like a solid, precision tool.

The razor is on the large side, the handle being about as long as the Futur and considerably longer than the Tech. I’ve found that I prefer a longer handle, the Tech, while I like it, feels particularly short for me.

The razor is well balanced, the hefty handle offsetting the thick base plates so that it handles well and does not feel out of sorts. The top cap is comparatively thin, but more than adequate for the task. 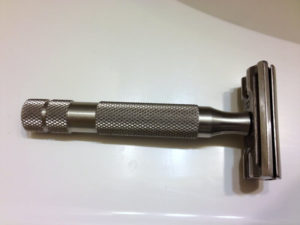 Starting with the handle, the afore-mentioned knurling and machining on the handle is superb. Most excellent. It uses the standard thread, so you can interchange any standard handle with the Rockwell head assembly, or use the Rockwell handle on one of your existing razors.
All of the surfaces on the razor are either machined, or ground. The exception to this is the majority of the area on the plates, these are investment cast as I understand it and have a nice finish.

The Rockwell 6S is not “adjustable” in the same way that the Futur or Progress are. It is more correctly “customizable” rather than adjustable by the fact that it comes with three different base plates. 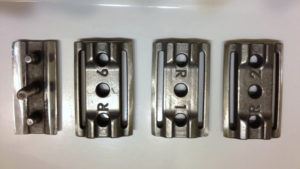 A little bit of background first. Of my previous razors, I think the Futur is a moderate to aggressive shaver.  The Tech is not an aggressive shaver: I would put it at mild to moderate (at best). I found in the past that I like Feather blades in both razors, with my Futur set to about a 3.5 out of 6. These razors provided me with a good smooth shave without irritation, but still aggressive enough to get rid of my full, coarse hair growth. I’ve used a variety of other blades in both of my existing razors and have found that many blades work well, but the Feathers along with a few others work the best for me.

I decided to start my shave with the Rockwell with a nice middle of the road blade with the #2 base plate. This should have given a decently close shave, without being too aggressive. In my other razors this blade is a good, safe bet. Not as close a shave as the Feather, but not requiring as much attention either.

I loaded up the Rockwell with a new blade and screwed on the handle. The top cap and base plates put a fair amount of camber to the blades. This resulted in a little different handle angle than I was accustomed to with my other razors. Nothing too drastic, just that each different razor has it’s own “personality” that must be learned.

Finding that happy angle was easy and I was off. Possibly due to the difference in camber, I noticed that I was getting a fair amount of tugging and pulling out of the new blade that I had installed… I finished out my first pass, but decided to switch the blade out with a Feather that had been in one of my other razors and had a few shaves under it.

I was fairly startled by the difference in how it felt. Much less pulling than the previous blade that I’d replaced. I’d never noticed that much difference in my other razors, but like I said, each is different and has it’s own personality.

My second and pseudo-third pass (I only ever do a 2.5 pass shave, as I’ve never found that against the grain never does my face any good, other than irritating it) things were looking and feeling good.

I believe it was Mark (Mantic59) who said in one of his reviews that the razor provided a lot of audible feedback. He was right! This razor more than any other that I’d used provides lots of audible feedback. It’s not something that bothers me, in fact I think I like it. I can easily tell if I’ve removed all the stubble, simply by the sound that I get. This makes it easier to find those spots that I may have missed.

After the shave I was pleased with the closeness I’d gotten from a first shave. Not perfect but good enough to know that it was going to work for me.

A couple more days of using the #2 base plate and I was ready to move up to the #3. Yes, the #3 was slightly more aggressive, but not excessively so. I did get a smoother, closer shave, with fewer leftover spots. I am definitely liking it. The razor does have a different face feel than when shaving than my Futur or Tech, not quite as smooth and gliding as my previous two razors. I think it’s the geometry of the safety bar and the angle at which the cutting edge meets the surface being shaved. It’s not uncomfortable, but it just feels different in use.

The #3 base plate was treating me well…. I am liking the shave that I get. Lately I’ve moved to the #4 base plate, and again, I noticed that it is incrementally more aggressive. Not too aggressive though… This is an easy razor to shave with, even with the larger blade gap, I was not cutting myself any more than I might with my other razors, just a little knick here or there if I was careless. The #4 base plate I think I like even more. Yes, I have changed the blade to a new Feather blade. I normally get about 5-7 days from a Feather blade before I replace it. The #4 base plate may be a bit much for daily shaving, but it works great for me for that extra close shave when I want it.

I haven’t made it all the way through to the #6 base plate yet, and I might never, but I do like the option of having it available to me if I have the desire to use it.

Some of the features that I really like about the Rockwell Razors 6S:

This error message is only visible to WordPress admins

This razor is legit . Feels good, works great, easy to use and it looks real nice too. I checked a ton of other brands and have tried a few too, but the Rockwell is just super solid and precise. And it didn’t cost a fortune like some of the others, which i appreciate in a good product. If you’re thinking at all about trying this razor, or maybe you’re trying to decide between a Rockwell and something else. Just get the Rockwell and be done with it. I don’t see how you can go wrong.

This razor is legit . Feels good, works great, easy to use and it looks real nice too. I checked a ton of other brands and have tried a few too, but the Rockwell is just super solid and precise. And it didn’t cost a fortune like some of the others,

It is a good quality razor, it gives really smooth shaving. The “R 3” is perfect for me, so I have no complaint at all. I used it with Polsilver Iridium blade and the result was perfect.

I really wanted to like this razor, but I couldn’t get a close shave with it.
It was very comfortable to use, but two hours later stubble would begin to reappear.
I get a better shave from a Baili DE costing half as much.
Pass on this one.

I really wanted to like this razor, but I couldn’t get a close shave with it.
It was very comfortable to use, but two hours later stubble would begin to reappear.
I get a better shave from a Baili DE costing half as much.
Pass on this one.

So far this is a great safety razor. The weight and balance are close to ideal and it even quite handsome.

I like the gunmetal finish. Turns out my attempt to save a buck failed. I needed the 4C with extra plates and had to order the 2/4 plate from the company. #2 works great for me. With shipping and a discount code, I’ve spent within 2 dollars of the amount of the 4C and still don’t have the #6 plate. Not that I’d ever use that one.

Like the razor just fine, but 4 stars because it can be a bear to change blades. I sliced my left thumb open already. Think before you twist!

I like the gunmetal finish. Turns out my attempt to save a buck failed. I needed the 4C with extra plates and had to order the 2/4 plate from the company. #2 works great for me. With shipping and a discount code, I’ve spent within 2 dollars of